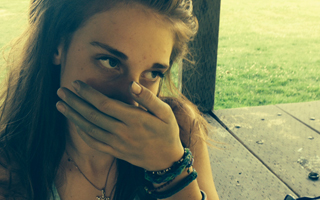 Have you ever had this conversation with anyone? Since I’m an Ayurvedic health practitioner, I actually have it quite often. I will share this little pearl of wisdom of “the burp” with you. But first, a bit of set-up.

The language of Ayurveda is Sanskrit, and Sanskrit is full of juicy and melodic words that rhyme and evoke meaning simply by hearing or saying them. The story of the burp wouldn’t be complete without the words Yogi, Bhogi, and Rogi.

A Rogi is someone who is a rogue. He is dishonest and a cheat; he is a scoundrel and a troublemaker. The Rogi may not mean to be bad; he’s just making sure that Number One (himself) gets taken care of (before all others). In so doing the Rogi may outright steal from others. Or he may thoughtlessly leave others without food because he has eaten it all. Rogis have a way of creating a disturbance in whatever space they occupy. People find themselves arguing and fighting, and they aren’t even sure what the source of their discontent is.

A Bhogi is a sensory-oriented creature. The big world of external sources of satisfaction and gratification are where they live. Candy–cookies–chocolate. Sex–drugs–rock & roll. Indulgence is where it’s at, and the world provides so many ways to get lost in the realm of the senses. Our senses provide us with important information about the world we live in, so in and of itself sensory exploration and enjoyment are no problem. However, when we become overly attached to having sensory experiences (ie: addicted) and forget to have a balance of life experiences, then we have crossed the line into being a Bhogi.

A Yogi has realized that the path of both Rogi and Bhogi are fruitless. Selfishness is self-defeating, and sensory pleasures are illusory and short-term. So what’s left? A desire for something more genuine, more “real,” more lasting. “There must be something more to life than material possessions and just getting by.” The Yogi is correct and generally finds deep and lasting fulfillment by following a spiritual path, by cultivating genuine and authentic relationships, and by finding a way to help others in a way that is also fulfilling to himself and that puts his talents to good use.

These three categories can all (and often do) exist in a single person, at different phases of life; they can be a progression of growth. Generally, we each need to have an experience of the Rogi and get in trouble for it to understand how our actions affect others. (I once stole tiny chiclet gum from the supermarket because they just looked so cute. The resulting hassle was not worth the momentary thrill.) We also need to know what it is to be a Bhogi. (Yes, I did just eat all 8 shortbread cookies that I bought this afternoon. They were amazing, and now I have a bloated belly.) The Yogi in me knows that it’s better to honestly pay for what I acquire; it honors the other person’s work and maintains a level of respect and value within my community that I hope will come back around to benefit me in the future. I also know that my health is better when I restrain my urges to eat all of the cookies. Besides, when I do that, I get to eat them tomorrow, too, and extend the taste bud excitement.

So… What does this have to do with burping, right?

Ayurveda places great importance on our choices and habits regarding the food that we feed ourselves.

At the end of the digestive process our meal is reduced to a collection of nutritional precursors that the body can use to build and maintain tissues (lymph, blood, muscle, adipose, bone, nerve). Assuming that we are eating good-for-us foods—and assuming that we have a robust efficient digestive system—we end up with a nice quantity and assortment of nutritional precursors. If either of those factors is less than favorable—or Gasp! they are both questionable—then we have short-changed ourselves, and our body bears the brunt. Dehydration, inflammation, imbalance, depletion, and (eventually) disease result. Occasional lapses in judgement can be smoothed over, but consistent poor choices take their toll.

So a Rogi doesn’t give a shit about any of this but is deeply miserable and is relegated to outsider status by members of his community.

The Bhogi cares more about having more mac & cheese yumminess coating his tongue than about eating a balanced diet. He ends up overweight and taking insulin to deal with his quasi-diabetic condition.

The Yogi realizes that both of these lifestyles are ultimately harmful on numerous fronts and begins to make choices from a standpoint of living with honor relative to himself/his body and is community.

Ok, ok. About the burping.

The Yogi knows that the stomach can only be effective at its stage of digestion (with is kneading and squeezing what we have chewed and swallowed to saturate it with digestive enzymes) when there is some empty space (for that kneaded and squished food to move into). Think about a time when you played around with a water balloon, how when you squeezed the balloon, the water needed somewhere to move to, so the stretchy wall of the balloon made that possible. Same thing for the stomach—except it has nowhere to stretch to because it lives in a confined space. Thus, we need to be sure that we leave some empty space in the stomach.

Are you with me so far?

I know you’re going to—helpfully—point out that we can’t look into the stomach to see how full it is. You’re correct, of course.

Here’s the thing: when the stomach is ¾ full, it sends up a little message. Guess what it is. A burp! It’s a small, inconsequential burp. You wouldn’t normally even notice it. It’s just a teeny puff of air, not a real burp. Not worth paying attention to, ordinarily. Except that if you are a Yogi—or aspire to be one—you will begin to pay attention to this burp because your stomach is now at capacity and shouldn’t accommodate any more food. This is when you should stop eating.

If you don’t stop eating now, your body will send up another burp. This is the Bhogi burp. As in, “ok, dude, it’s *really* time to stop eating.”

If you *still* don’t stop eating, you will come to the Rogi stage where you have a lot of aggressive burping (and probably farting) because you have overloaded your system, and it’s going to take a whole team to fix this mess.

About the Author: Katrina Svoboda Johnson