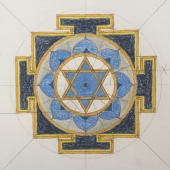 It is often said that difficult times have a hidden reward.  That reward does not lie in the obstacle itself, but rather in the dharmic purpose of the challenge.  All too often the emphasis of difficult times is on blame, fault, and enduring the insult of the difficulty — rather than taking a proactive, purposeful stance regarding it.  Lord Krishna proclaims in the Bhagavad-Gita, “There is nothing better for a Kshatriya (a spiritual warrior) than a battle in accord with dharma.”  This emphasis on dharma during difficult times has the potential to lead us into a place of self-discovery at journey’s end.  When that understanding is reached, the duration of hardship ends, and the process of liberation begins.

When dharma emerges — no matter how obstructing the darkness, pain, and despair — we begin the journey to light, forbearance, and hope. In the Gita, Krishna says, “The wise, their intellect united with the Self, having renounced the fruits of actions and being liberated from the bonds of birth, arrive at a state devoid of suffering.” In The Prophet, Kahlil Gibran says, “Your pain is the breaking of the shell that encloses your understanding.”

This class will focus on understanding and mitigating the obstructing planetary forces which are associated with challenging times — and reinforcing the purposeful planetary forces to reveal the unwavering dharma that is the hidden reward of difficult times.

*We will take a one-hour break mid-way through the class. Feel free to bring a lunch with you.

Dennis will be available for a limited number of 1-hour readings on Sunday, January 22nd. Cost is $200. Please contact his office to schedule: